Your Other Family Doctor!

We will do our best to accommodate your busy schedule. Schedule an appointment today!

Please complete this form to request an appointment. Please note that you do not have an appointment until you receive confirmation from us. Thank you!

Your feedback is important to us! Use this form to suggest services you would like us to offer.

This is a page dedicated to the memory of our beloved pets and companions. If you would like your pet memorialized on this page, please email us at kamvetclinic@hotmail.com 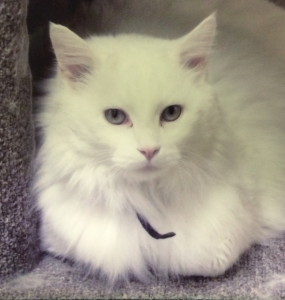 It is with great sadness that we announce the passing of our beloved Snowflake.

Snowflake was born approximately June 6, 1999 on Cote first nation. He came to live at the veterinary clinic in 2001. Snowflake was often seen napping on the counter, where he supervised all comings and goings. He held the titles of security guard and vice president of public relations. Although he expected to be admired for his glorious white coat, he had a low tolerance for teasing. He liked to look down on the other animals from his perch. At the vet clinic, he was Cindy,s special assistant. He liked to hide from Dr. Ellen at closing time, and made her hunt for him before she could go home.

If the clinic was too busy, he preferred the quiet atmosphere of the library down the hall. In his early years, he had his own chair at the library and spent much time there listening to stories and mingling with the patrons. Snowflake was a regular at the Alcoholics Anonymous meetings when they were held in the basement. He had perfect attendance and liked to share in coffee and snacks. When the Edge Business Solutions was located in the Crowstand Centre, he was a regular helper there also.

Snowflake was a well known figure who interacted with many people. If friends so desire, memorial donations in memory of Snowflake may be made to the Companion Animal Health Fund of the Western College of Veterinary Medicine, University of Saskatchewan, Saskatoon or the Yorkton chapter of the SPCA.